The Groundhog is being developed to line-follow at low altitude and higher speeds.  This video is of the field testing taking the speed up to 1.75 m/s.  It also explains why the Groundhog now sports sunglasses.

An oval of 50mm red webbing, bends of radius approx 3m and straights of approx 15m. Testing took place in early morning with glancing sunlight on dew-soaked webbing – great for walking the dog but not so good for computer-vision.

END_OF_DOCUMENT_TOKEN_TO_BE_REPLACED 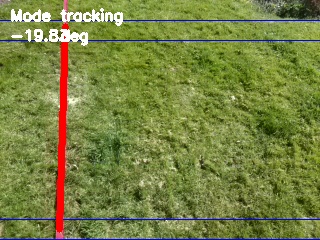 Several lessons were identified here  from the entry of The Groundhog hexacopter in the MAAXX Europe competition earlier this year.

Current developments are around correcting the issues so that we get a UAV successfully lapping the oval track at a minimum average speed of 1m/s.

A number of changes in approach have been made from that previously blogged.  Recall the platform is based on a combination of Pixhawk/Raspberry Pi3/OpenCV/Dronekit.

As in MAAXX Europe, it makes sense to initially test on a straight line.  Initial testing was conducted outdoors using red-seatbelt webbing for the line.  It was not possible to fly below about 2m as the propwash blew the line away (will sort that next time!).

In this last post of the series I shall overview the main program including the control algorithms for the Groundhog.  Code is written in Python, using Dronekit and OpenCV all running on a Raspberry Pi 3.

As we are flying indoors without GPS and also without optical flow, we are using quaternions to control the vehicle in the GUIDED_NOGPS flight mode of ArduCopter.  To be honest, I’ve not come across anyone else doing this before, so it must be a good idea…